Sometimes you remember the exact moment when you heard a song for the first time. I certainly remember when I came across Andrew Belle’s album called Black Bear. It was my first time hearing his music, so I immediately jumped excitedly asking who was it playing, as I knew it was one of those rare songs that I will keep coming back to. As the song was so good, I played the rest of the album too, and it felt so honest and real that it got me curious about the artist himself. Luckily, he was kind enough to find time and answer a few of our questions.

Did you always feel somewhere inside that music is what you want to spend your life doing?

You know what – it seems weird to say, but I really did to be honest. Those feelings began when I was 13 and picked up the guitar for the first time. I can’t say in what way I knew it or to what degree, but I recall a satisfaction in making music that I hadn’t found in anything else. Maybe for that reason it only made sense, deep in my subconscious, that that’s what I would spend my life doing one day. There were many years where I didn’t realize my affinity for writing and didn’t pay attention to what I was being called to. But, once I rediscovered it in college and my passion for songwriting really exploded, I couldn’t imagine doing anything else with my life from that point forward.

As you write your own songs can you tell us what came first the chicken or the egg – where you first interested in writing or singing, or it kind of came hand in hand for you?

Definitely writing. I still struggle with the singing part. Learning how to sing was really just a consequence that I had to assume after I realized how much I enjoyed writing and making music. I would have loved to have the camaraderie that comes with being in a band, but I was afraid that my career would hinge on someone else’s decision to stay in music or not. People change and quit music so commonly that the only option was to learn how to write and perform on my own. 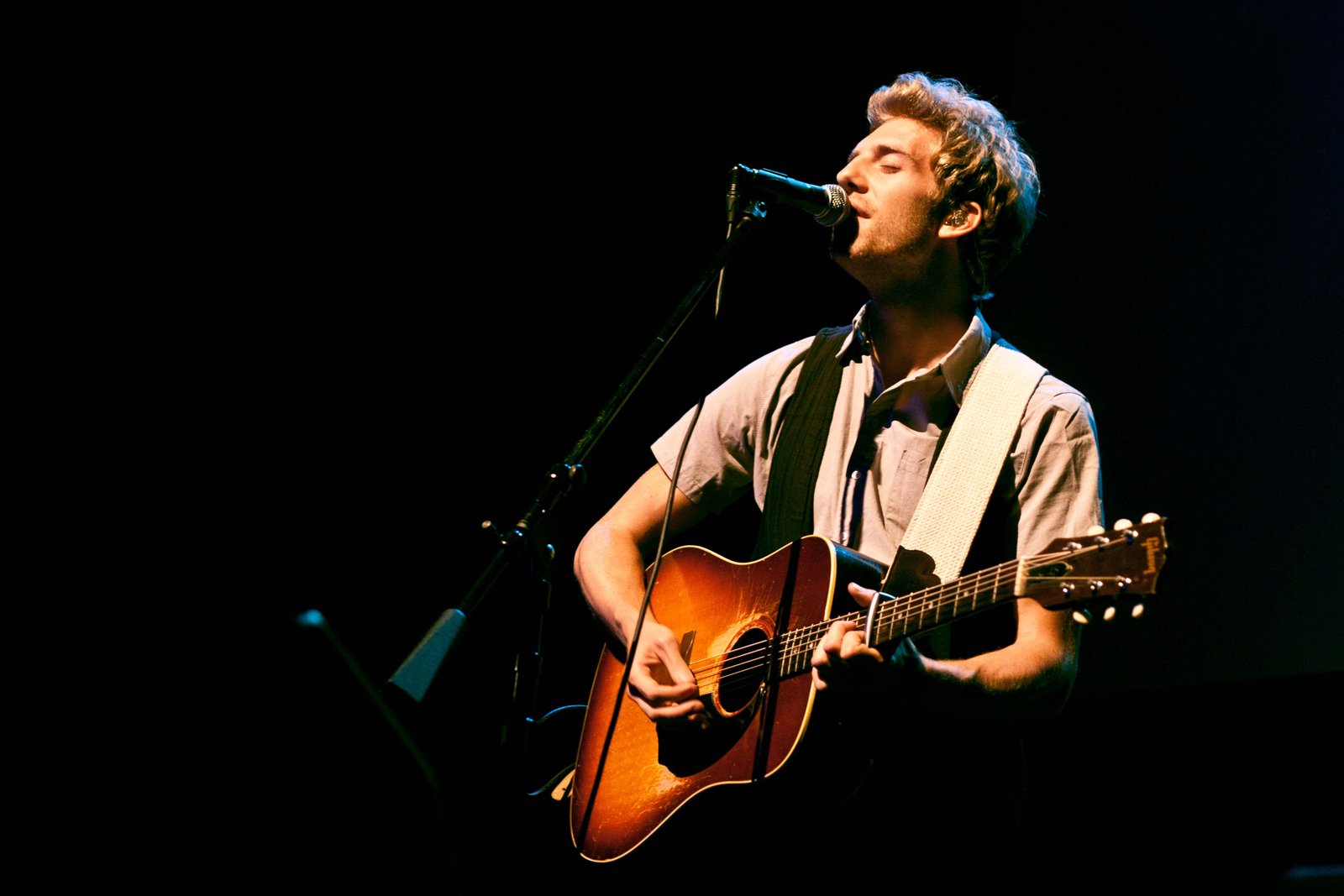 How does the process of making a new album start? What inspired you to create Black Bear?

I guess it starts when I feel like enough time has passed between what I last did and what I’m about to do. I don’t like the idea of making a sequel, so I usually wait a long time until I feel like I have new inspiration and direction to make something that’s another progression or step in the direction of musical maturity. I also need enough time to pass so that the subject matter of my songs isn’t redundant or repetitive. I need life to happen so that I have something worthwhile to say. The musical inspiration for Black Bear came from discovering bands like M83, Beach House, and Washed Out. Also, the soundtrack from the movie ‘DRIVE’ played a large role in filtering some of the sounds that I knew I wanted to achieve. The subject matter for the lyrics were inspired by a newly discovered Christian Faith and my recent marriage.

It is natural for people to grow and when you’re an artist your music gets to grow with you. Still, were you afraid of changing your sound with the new album and not “fitting in”? Changes always seem to scare people.

I wasn’t really afraid – because I was confident in the music. I’ve always been able to trust my gut with whether something is good or not – sort of an internal barometer – and I knew that what we were making was as good as anything I’ve done so far. I was a little anxious for people to hear the new sounds but I had to make up my mind early on that if some people were turned off by it, other people would be turned on to it. I don’t want that to sound like I take my fans for granted. I am still so thankful and humbled that people listen to me or care what I have to say, but rather I knew that if I was going to continue with music, I had to be making something that I was inspired by and enjoyed, otherwise I wouldn’t be able to do it any longer. So, it was a complete necessity to evolve and I think that helped my anxiety about it.

What is right now your favorite song from the last album and why? We have to say that we are hooked on “I Won’t Fight It” and “Black Bear”. Also, is there a special lyric that you consider your little literary treasure?

Interesting that you appreciate the slower, more somber songs on the album – I do too 🙂 Although, I think that the way ‘Sister’ turned out is still my proudest achievement in recording so far. I’m just really proud to have written it and I also have to give credit to my producers, Chad Copelin and Jarod Evans, who played a huge role in making that song turn out the way that it did.

I’m really proud of all of the lyrics on the record but I think the ones that I am most proud of are in the Chorus of ‘The Enemy’. I really wanted to write something that confessed the darkness that can still reside in my heart at time, despite my best efforts. Selfishness, Pride, Greed, etc – these are things that are important to admit and be aware of in yourself so I wanted to make it very clear that I am not a perfect person and that it’s only by the grace of Jesus that I can even recognize that.

We know that the twenties are the period in our lives when we grow and learn so much. Can you share with us some of the most important lessons you have learnt so far?

One of the best lessons I learned (and am still learning) is that work is a good thing. I think most of my life I had the mindset that the best thing that could ever happen to me was to make a bunch of money so that I could make a perfect little life for myself and then lie on a beach somewhere. Not that I came even close to that, but after my last record I was successful enough that I was able to take some time off from touring and other things. I spent a lot of time and money getting my home set up exactly the way that I wanted it to be; created a nice little comfortable life for myself so that I could go for walks or ride my bike or read all day and not be burdened with a to-do list or chores to accomplish. It took me about two weeks to discover that I was miserable and I couldn’t figure out why. I read a really good book called ‘Every Good Endeavor‘ by Dr. Tim Keller and it gave me really good insights into work and how we were created for it. It completely changed my entire mindset of what the purpose of work and life was; how to strive for excellence but to not find your identity in your achievements or accomplishments – because they can change or be taken away as quickly as they arrived. My goal now is to work hard so that I can honor God and create something of value that promotes human flourishing in its own little way. I am also learning when the appropriate time is to step away and rest from my work – to enjoy rewards earned and be filled back up so that I can get right back to it again.

What kind of music do you listen to privately? What are some of your favorite band/singers and what songs are on your playlist right now?

I really enjoy ambitious, ambient, electronic music. Washed Out is a great example of what I’m referring to when I say that. I also recently discovered the album ‘Riceboy Sleeps‘ and it has been really inspiring. Daft Punk, Lorde, and Wild Cub have been on pretty steady rotation as well.

What are the best sides and the worst sides of being on tour? Can we hope to see you performing in Europe anytime soon?

The best part of being on tour, for me, is being able to see the country and the world. I love being able to leave home and see places that I didn’t think I would ever see when I was younger. I am a huge food fanatic and so I also love being able to experience all of the different restaurants and regional cuisines that I read about or see on TV.

The worst part of being on tour is being away from my wife and our home. As much as I love travel and adventure, I am a total home body and can really only stand to be gone for days at a time. That’s why last year you never really saw a list of tour dates span more than two weeks at a time. I like to pace it out – it’s the only way that I can do this job and maintain my sanity. It goes back to why I work and finding the balance that I referred to earlier. That being said, we do plan to finally play some European club shows in 2014 and I am really excited about that.

What is the quality you appreciate the most in people?

I really enjoy a selfless/humble/helpful person. Those are the people that I’m immediately attracted to and respect the most. They are the ones who inspire me to stop thinking so much of myself all of the time.

What is the accomplishment in your life so far that you are most proud of?

That’s nearly an impossible question and so I will narrow it down to this year and keep it related to my music when I say that ‘Black Bear’ being named amongst the top-ten best Singer-Songwriter albums released on iTunes in 2013 was a huge honor.

Do you have a motto in life, some kind of mantra or a quote that helps you get through and stay true to yourself?

” You intended to harm me, but God intended it for good to accomplish what is now being done, the saving of many lives.”

This interview was done in January 2014. To find out more about Andrew and his music visit his website.